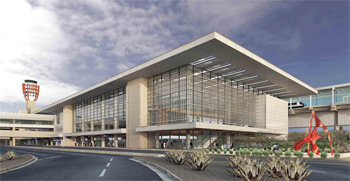 In 2014, the City of Phoenix began a three-phase project to renovate the airport’s Terminal 3 over a five-year period. The 880,000-square foot terminal has 17 gates separated into two concourses by a central building outside of the security area. The first phase involves a complete remodel and expansion of the terminal’s north and south security checkpoints.

For this first phase of the project, Fisher Engineering, Inc. (FEI) was engaged by the architect, DWL Architects + Planners, to provide an initial review and analysis of egress associated with a number of design options. The egress analysis addressed all code-related requirements, including travel distance, occupant load, common path of travel, door and stair width, and exit capacity.