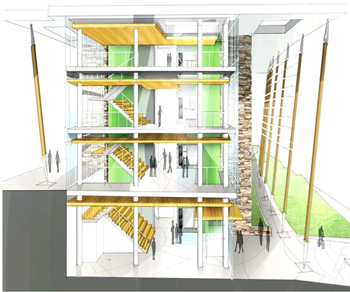 Charles R. Drew Charter School is the city of Atlanta’s first charter school. It opened in 2000 after an urban revitalization project tore down the blighted East Lake Meadows housing project and replaced it with The Villages of East Lake, an innovative, mixed-income community next to the historic East Lake Golf Club. The school aims to serve as a “pipeline” to college for low-income, minority students.

Since its founding, Drew Charter School’s population has grown from 240 students to over 1,200. In 2012, an effort began to create a 200,000-square foot senior academy for grades 9-12, thus fulfilling the school’s mission to become a “cradle to college” institution.

The building’s design included a three-story atrium that needed a smoke control system to comply with the International Building Code (IBC). The IBC requires that a qualified, independent third party Specially Inspect smoke control systems to verify that the system as installed complies with code requirements and the approved construction documents. Fisher Engineering, Inc. (FEI) was engaged to provide these Special Inspection services. In this role, FEI reviewed design documents, equipment cut-sheets, and air balance reports; witnessed and directed testing of the smoke control system; and provided a Special Inspection report with recommendations.