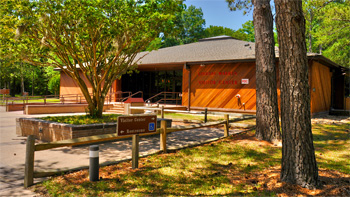 Fort Raleigh National Historic Site marks the location of the first English settlement in the U.S., Roanoke Colony, also known as the “Lost Colony.” Founded in 1587, the colony collapsed sometime between 1587 and 1590 when supply ships failed to arrive on time. When next visited, the settlement was abandoned, and no survivors were found. The fate of the colony remains a mystery.

Fort Raleigh National Historic Site was established on April 5, 1941 and is owned by the National Park Service. Its buildings were constructed in 1965-66 and are considered significant because of their architectural design.