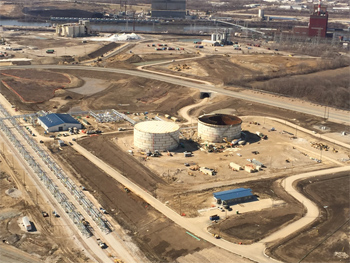 The North Laraway Unloading Facility is a rail unloading facility consisting of four parallel rail tracks of 30 cars each, with space to accommodate a doubling in size of the facility in the future. Crude oil is unloaded from the rail cars and pumped to one of two aboveground storage tanks, again with space to allow for eventually doubling the storage capacity by adding two more aboveground storage tanks. Each tank is 150 feet in diameter.